The Expediciones De Las Americas is the most badass road trip you’ve never heard of. A couple of decades after starting the Jamboree, Mark A. Smith led an expedition of Jeeps on the longest off-road trip in history, trekking 21,000 miles over some of the world’s most inhospitable terrain, from the southernmost tip of Chile to the northern reaches of Alaska. In the 4×4’s first public outing, it was driven up the steps of the U.S. Capitol. When asked what it was, the driver replied simply, “It’s a jeep”. Two years later, Willys-Overland filed a trademark application.

For consignment, a CJ, (Civilian’s Jeep), version 7 from 1983. This example with large tires and wheels, an included soft top, soft side doors, and clean interior, remaining true to form without too many embellishments for the rugged trail, but still fully capable and trail rated. Grab the tent and let’s go climb something outside!

Due to modifications of the emissions control devices installed by the manufacturer, please check your local, state, and federal laws to determine if this vehicle is applicable for use on public highways in your area.*

With the iconic Jeep look, the metal vertical chrome grille with single flanking round headlight on either side, and spring-loaded clipped hood, we are talking an all American Jeep sport utility before the term came to be. Black is covering this off roader, and it looks just in great condition. Black accents like the black canvas side doors and included black soft top and black plastic fender flares complete the exterior. Chrome dress up is on for the bumpers both front and rear along with the rocker moldings all giving a touch of class to the overall look. 15-inch chrome wheels are wrapped by knobby 31×10.50L15RT tires all around as well as on the rear swing out spare tire holder.

Two black high back buckets are up front and show some wear particularly on the driver’s side with a small seam separation on the left side. They flank a new Intra-Pod center console in black with a large lockable storage area and oversized cupholders. The original rear seat with tuck and roll inserts, white highlighting and black vinyl bolsters stretches across the rear cargo area. The dash is black metal, and houses the stock Jeep gauges and on the passenger side has a black “Jesus” bar for those steep ones, where you are in control, but the passenger thinks otherwise! On the other side we see the original 3 spoke rally style steering wheel protruding from the dash. A newer Retro Sound AM/FM/USB/Bluetooth stereo is taking up residence in the dash and has been fitted with a new Kicker 8″ sub with an amp as well as 4 new Kicker 5 1/4″ speakers. A 4 point roll bar is over the rear passenger area should things go awry on an off road excursion.

As I loosen the front lockdowns, and raise the hood and I have found a place to eat my lunch…yes it’s that clean. Fully restored, a nice blue painted block with supple hoses and cleanly installed wiring is seen. We are peering at a 258ci inline 6 cylinder engine and it is showroom condition. It is topped by a 2bbl carburetor, and backed by a T5 5-speed manual transmission. In front there is a Dana 30 axle, and on back an AMC 20 rear axle (2.73 ratio).

Some road dirt, and a smattering of surface rust is seen underneath. All throughout remains structurally sound, in good condition and all unremarkable. The transfer case is oil free from drips, and some new steering parts have been recently put on. Leaf spring suspension is all around and drums on back and disc brakes are upfront. A snake-like headers and dual Flowmaster mufflers are noted for the exhaust but the catalytic converter is missing.

This beauty started right up and was ready to climb the walls and anything else we had here at Classic Auto Mall that it could drive over. So I took it to the test track and here all was functioning beautifully. Good acceleration, plenty of power, all gearing 2 and 4 wheel drives were working, and the sound system was awesome. The seats are comfy and in the open air one feels a sense of freedom, although when a semi goes by it makes you think about that exterior being right there!

All good here to grab the groover and go for a rapid ride in some out of the way place. This vehicle can and will do it, with plenty of power, 4WD, knobby tread, and a secure interior you can get wet but wouldn’t want to! A nice condition off roader, on roader, or the daily commute. Jeep or GP, it’s good to go. 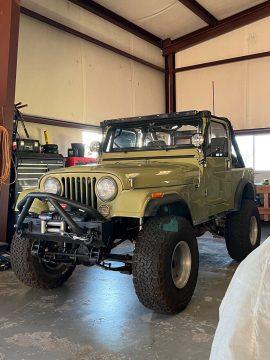 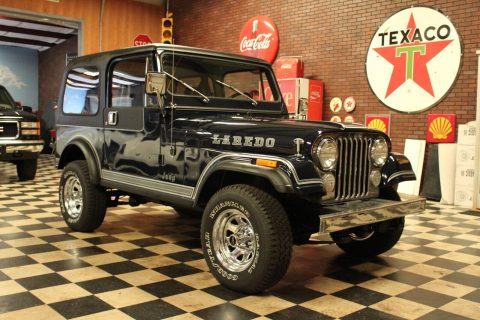 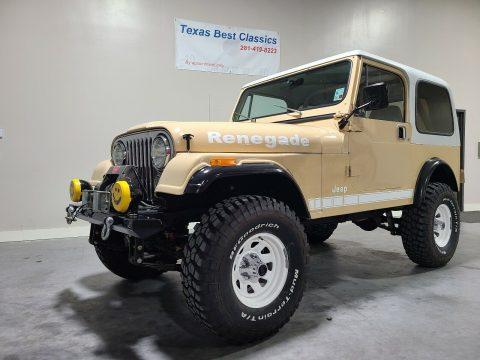 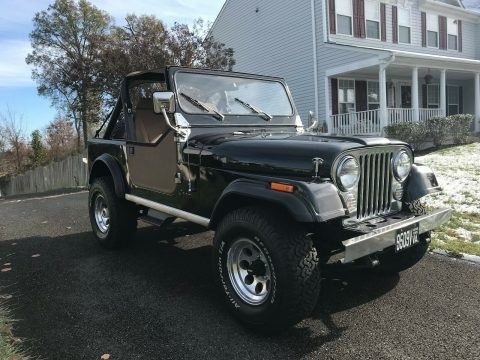 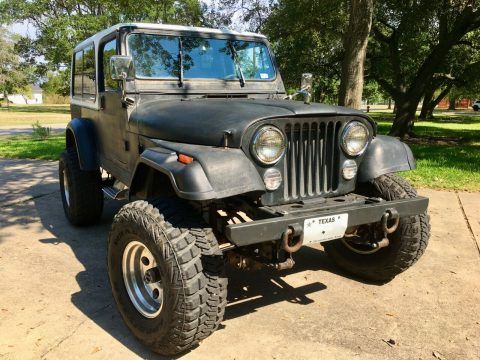